The ordinary wall sockets around the house are normally connected to a ring circuit (also referred to as a ring main). The ring circuits of a domestic property supply the socket outlets and fixed appliances in the premises.

The ‘ring’ is formed by the cable going from the consumer unit to the first socket, then on to the second socket and then the next socket etc. until the cable returns to the consumer unit. This means (in simple terms) that every socket on the ring circuit has two cable routes back to the supply. The cable of the ring circuit consists of a brown (live) wire, a blue (neutral) wire and a bare copper earth wire, all three being enclosed by an outer PVC sheathing. The cable used in domestic ring circuits is either 2.5sq mm or 4.0sq mm twin core and earth, these are rated (in free air) at 24amps or 32amps respectively.

Each ring circuit is protected by a 32 amp fuse or trip fitted in the consumer unit. Modern installations incorporate a Residual Current Device (RCD) before the consumer unit which trips the whole system off if a fault is detected.

In older houses the cabling for ring circuits (and other circuits) may be fed through the wall cavity with the cables coming into the back of the wall mounted socket. This is unacceptable in new premises and extensions. It is now considered that cables within the cavity may become wet causing the insulation of the cable to break down and moisture running down the cable into the socket. When rewiring older houses, new cables should not be run through the cavity, they should be run through new ducting embedded in the inner wall surfaces or under floorboards.

A ring circuit is considered to be rated at 30amps (7200 watts). A ring may serve up to 100 m sq of floor area and, in theory, may have any number of sockets outlets or fused connection units connected to it. With each socket outlet is normally rated at 13 amps, as a ‘rule of thumb’, they are limited to under twenty outlets, it is unlikely that the variety of domestic appliances being used at any one time will exceed 30amps. The length of cable used in a ring circuit is limited to 50 metres for circuits protected by an MCB. The sockets are normally mounted flush with the wall although surface mounted boxes are often easier to fit when sockets are added to the circuit. 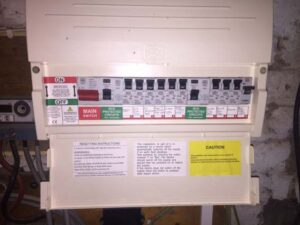 How much does it cost to replace a circuit breaker switch?

Circuit breaker panels and fuse boxes serve a similar purpose—to protect an overloaded electrical circuit by interrupting the flow of electricity—but they work differently. A fuse is made of a piece of metal that melts when overheated, interrupting the electrical flow. A circuit breaker has an internal switch that is tripped by an unsafe surge of electricity. Fuses interrupt the flow of power faster but must be replaced after they melt. Circuit breakers can simply be reset. A circuit breaker panel is essentially a big switch made up of smaller ­switches that correspond to certain electrical zones in a building. Should one of the switches fail, an electrician can replace it for approximately $120–$200, depending on the region

If any additional wiring repairs or rewiring are needed, it will cost extra. Most electricians charge by the hour for wiring work, with rates starting around $40–$50 and going up to $90 in some areas. Materials costs will be on top of the hourly rate and include the wires as well as any other materials needed to replace drywall or other interior finishes.

In some older homes, it’s not uncommon for circuit breakers to frequently trip—which can indicate that it’s time to update the entire panel. An updated panel increases the power available to all the appliances and devices in the home. The minimum amps required in modern homes is 100, but a typical 2,000-square-foot home should have a 200-amp panel. Most electricians charge $1,250–$3,000 to upgrade an existing panel to 200 amps, depending on how much work is involved (rewiring, relocating the panel, etc.). If the circuit breaker panel needs to be relocated, it can cost an additional $500–$1,000 to cover the cost of moving wiring and installing the panel in its new location.

Older homes can require any number of electrical upgrades to safely supply enough power to modern appliances and electronic devices. Some updates, such as installing new ground-fault circuit interrupter (GFCI) power outlets, are straightforward and typically cost $100–$200 each. These outlets are self-grounding and are now required in all new kitchens, bathrooms, crawl spaces, unfinished basements and most outdoor receptacles.

Other updates are more expensive and time-consuming. Updating knob-and-tube wiring, for example, could cost $8,000–$15,000 in a large home wiring is not always hazardous, but the materials used—in particular, the rubber wire coverings—can become brittle over time, which can make electrical connections unreliable or, in some cases, can increase the chance of an electrical short or fire 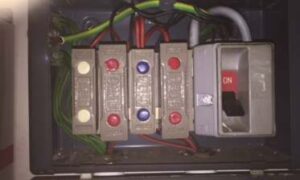 If an installer is not registered, then certain riskier jobs (identified as ‘notifiable’ in the Building Regulations) will need to be inspected, approved and certificated by:

A building control body (your local authority or a private approved inspector), or

The building control body or registered third-party certifier must be notified before work starts.

The installation of a new consumer unit or fuse box

The installation of a complete new circuit – for example a ring or lighting circuit, or a new circuit for a cooker, shower or immersion heater

Most repairs, replacements and maintenance jobs, and alterations or additions to existing circuits outside special locations, are not notifiable. The Building Regulations set out overall criteria and requirements to ensure electrical safety. Approved Document P provides further practical guidance for undertaking this type of work. You should bear in mind that any electrical work you carry out within your home, garden, garage, shed or other storage building must comply with the requirements of the Building Regulations. If you are unsure about the requirements, you should contact your local authority’s building control department.

The Building Regulations set standards for electrical installation work only in relation to dwellings (houses, flats etc). If the work is carried out in industrial or commercial buildings it is covered by the Electricity at Work Regulations 1989. The Health and Safety Executive (HSE) is responsible for making sure that electrical installation work in these kinds of buildings is safe and if you have any queries about work in these buildings you should contact the HSE.

What is the difference between a fuse box and an electrical consumer unit?

A fuse box and a consumer unit serve the same purpose. They distribute electricity in your house through multiple circuits and instantly turn the power off whenever a power overload occurs on one of the circuits, which is commonly known as “tripping”.

A fuse box uses fuses instead of circuit breakers. Each fuse contains a wire which will melt if there is an electrical overload and make the circuit trip and switch the power off.

It is not as easy to identify a faulty circuit when using a fuse box and the, now melted fuse, will need to be replaced before the power can be restored. Consumer units are basically the modern and safer version of fuse boxes which in most cases are no longer compliant with current electrical regulations.

How do I know if I have an old-fashioned fuse box?

It’s very easy to tell if you have an old-style fuse box or a more modern consumer unit. An old-style fuse box will have a series of fuses contained inside fuse carrier which you can manually remove and replace when one of them goes off following a power overload.

What is an RCD?

An RCD, or residual current device, is a life-saving device which is designed to prevent you from getting a fatal electric shock if you touch something live, such as a bare wire. It can also provide some protection against electrical fires. RCDs offer a level of personal protection that ordinary fuses and circuit-breakers cannot provide.

What does an RCD do?

An RCD is a sensitive safety device that switches off electricity automatically if there is a fault. An RCD is designed to protect against the risks of electrocution and fire caused by earth faults.  For example, if you cut through the cable when mowing the lawn and accidentally touched the exposed live wires or a faulty appliance overheats causing electric current to flow to earth

How does it work?

An RCD constantly monitors the electric current flowing through one or more circuits it is used to protect. If it detects electricity flowing down an unintended path, such as through a person who has touched a live part, the RCD will switch the circuit off very quickly, significantly reducing the risk of death or serious injury.

What are the main types of RCD?

RCDs can help protect you from electric shock in potentially dangerous areas like bathrooms and gardens, and there are various types of RCDs that can be used to make sure you are always as safe as possible

These are installed in the consumer unit (fusebox) and can provide protection to individual or groups of circuits. A fixed RCD provides the highest level of protection as it protects all the wiring and the sockets on a circuit, and any connected appliances.